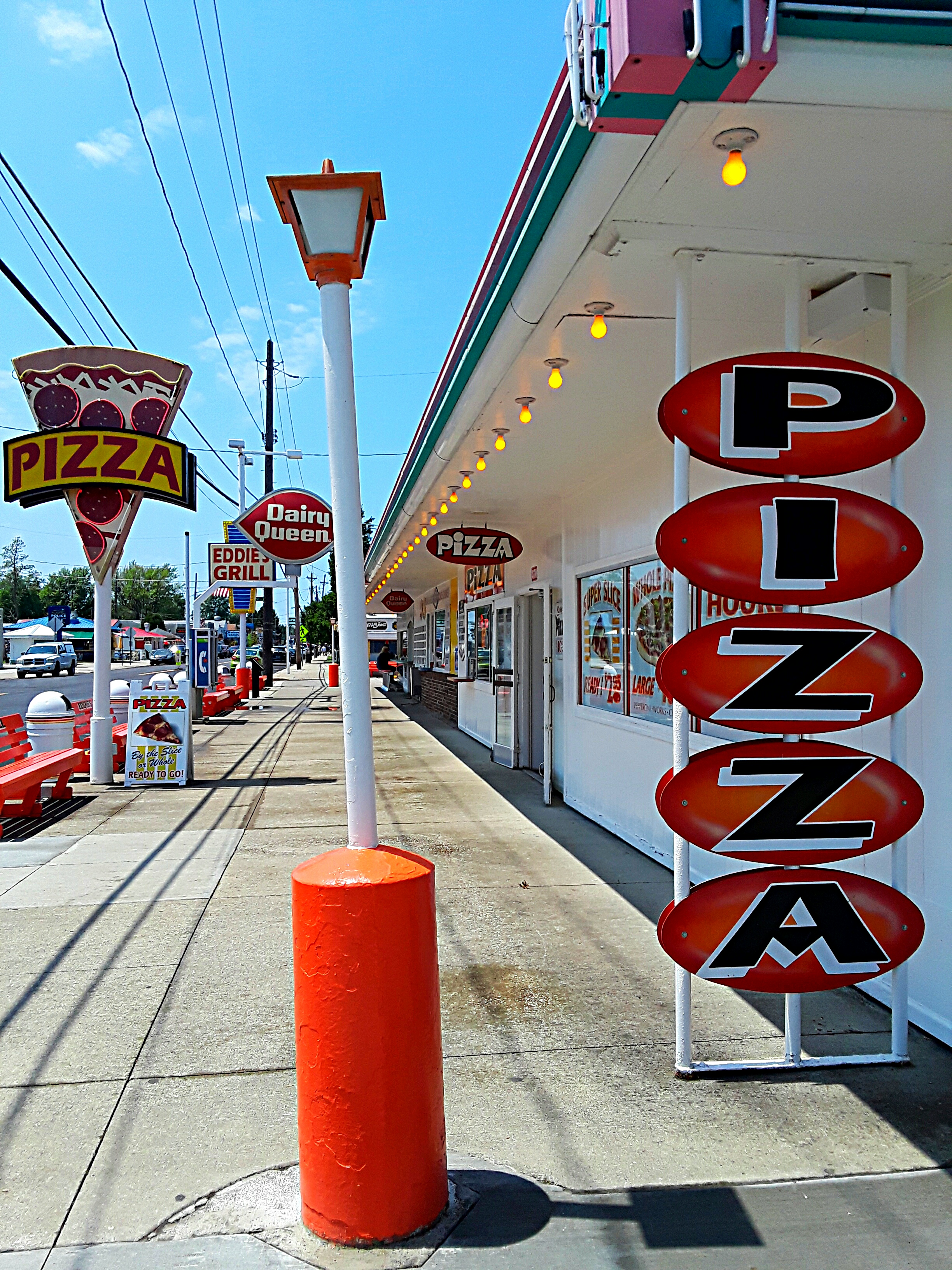 Geneva-on-the-Lake, Ohio (GOTL for short), is an old time Ohio town that brings back the best memories of summer vacations.

This funky town is almost exactly between Cleveland, Ohio, and my hometown of Erie, Pennsylvania, and just 15 minutes north of Interstate 90 at the Geneva exit.

My husband and I visited Geneva-on-the-Lake thirty years ago, when we were dating. My first impression was that I had stepped back in time to the 1950’s and 60’s – The Mad Men era.

This isn’t urban territory, though. It is strictly amusement park Americana. Think American Graffiti at Coney Island, and you’ve got the setting for Geneva-on-the-Lake.

In the 1990’s, there were mostly guys on Harleys cruising the main strip. The town relished their patronage, and to this day, keeps the welcome mat out for bikers. There is even a tribute rally, “Thunder on the Strip,” the weekend after Labor Day.

But, I’ve noticed a change in the crowd.

You’ll still see some bikes slowly making their way across town, although now they are among the SUVs and Hondas, BMWs, and Hyundais cruising The Strip.

The town has become more mainstream, and attracts a wider variety of people.

Part of the change is no doubt because of the popular Geneva State Park and its luxury “Lodge.”

Wineries are another fairly recent addition to the local scene. Ferrante Winery has been here forever, but others have opened lately, and wine tours have become a popular attraction.

The food and drink can be great, if you go to the right places; and there is lots to do here, if you plan ahead.

Let me help you out.

“The Strip” and Its Surrounds

Geneva-on-the-Lake is due north of the city of Geneva, Ohio.. This area was settled by families from Geneva, New York, in the early 1800’s.

The lakeside village became a summer vacation destination in the latter half of the 1800’s, and an amusement park was added around 1945.

Things here get hopping on Memorial Day weekend, though the state lodge and some businesses stay open year round.

“The Strip” is Lake Road East, aka State Route 531, and it’s here you’ll find most of the attractions. Just walking the strip from the westerly Geneva State Lodge to the town park on its east border, you’ll encounter dozens of food stands and restaurants, arcades, and gift shops.

Our favorite restaurant is Piero’s Pasta House. It’s small inside, and casual. Piero’s makes the best chicken fettuccine Alfredo we’ve ever had. The chicken is moist, the broccoli al dente, and the cream sauce smooth, hot, and rich.

You can watch your dish made in the open kitchen, where cast iron skillets, cream, and grated cheese are flung by busy cooks with the know-how to create something fresh and delicious.

I’ve read some complaints about Piero’s prices, but for real food (not processed, pre-made, or previously frozen), it’s true that you get what you pay for.

For a snack on the fly, Eddie’s Grill has the classic burgers and fries.

You can also find authentic gyros and pizza by-the-slice on The Strip.

For more formal dining, you’ll want to head to Horizons Restaurant and Lounge, inside The Lodge at Geneva State Park. In season, you can dine on the patio.

Speaking of season, you are likely to see a wedding party if you patronize The Lodge on weekends. Dinner reservations are a good idea.

Horizons Lounge/bar has a more intimate atmosphere and offers great food and drink. Just a heads up – this may be a bucolic setting, but prices for drinks match those of the big city.

This is Ashtabula County, and it’s known for its wineries and covered bridges. I’ve always been a bit hesitant about the wine, but the bartender at Horizons Lounge helped me find a good choice.

When our kids were about 7 and 10, we were into patronizing amusement parks. Ohio and Pennsylvania have a plethora of these.

Our tradition, along with our friends’, was to begin each amusement park visit with a trip to the on-site watering hole. If it was a “dry” park, it wasn’t on our triptych.

On this count, Geneva-on-the-Lake fits the bill.

We used to frequent The Oak Room. Dark, paneled walls and worn, leather-topped bar stools were a stark contrast to the bright sun and heat of outdoor recreation.

This weekend, I saw that the place has a new name: Murphy’s Ale House. I have to believe that the decor hasn’t changed much. Nothing changes really fast in Geneva-on-the-Lake. That’s part of the charm.

For dessert, you are a fool to pass on Madsen doughnuts.

Forget about low carb, at least for the day. How can anyone possibly resist the Madsen chocolate stick, a classic iced chocolate raised doughnut fresh from the fryer, filled with a sublime sweet cream filling?

Time it right, and the doughnut will be soft, elastic and warm on the inside, while the outside retains a slight crunch from the fryer.

Madsen’s has been in business since the 30’s, and here you can buy an awesome, tie-dyed tee shirt for your collection, calorie-free, along with your doughnuts.

If doughnuts aren’t your thing, there are plenty of ice cream and candy offerings to tempt you.

Recreation, If Not Amusement

There are miles of biking and hiking trails, perfect for enjoying the water views and green of the surrounding woods. A wide variety of birds that pass through the marshes and estuaries in this area, making it a birders’ destination.

You can rent a lakeside cottage, cabin, or campsite for adventure, if you’d rather not stay in the Lodge.

The park recently added a zip line adventure, and I spied some swan boats tucked away near the zip line headquarters.

Plus, there are arcades among the shops and restaurants on the strip.

You’ll also find a Ferris wheel behind the Firehouse Winery, one of the last vestiges of the old amusement park.

We’ve always found Geneva-on-the-Lake a special place to spend a weekend, or even a relaxing afternoon. That’s been true before we were married, while raising our kids, and now that we’re empty-nesters (though the focus of the entertainment has shifted a bit over the years!)

If your looking for a get-away just an hour from Cleveland or the Pennsylvania state line, add this unique destination to your short list.